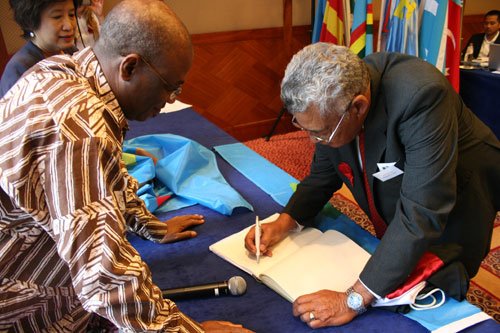 The Kaptein's Council of the Rehoboth Basters is active internationally to provide the Basters a voice in international politics and advocate for their rights in organisations like the United Nations and the UNPO.

The Unrepresented Nations and Peoples Organization (UNPO) is an international, nonviolent, and democratic membership organisation. Its members are indigenous peoples, minorities, and unrecognised or occupied territories who have joined together to protect and promote their human and cultural rights, to preserve their environments, and to find nonviolent solutions to conflicts which affect them.

Founded in 1991 at the Peace Palace in The Hague, UNPO is unique as an international organisation in that it is built entirely by its Members. Through this strong connection to those suffering the consequences of the exclusion the organisation seeks to address, UNPO has since grown into a prominent and respected international forum.

The Rehoboth Basters were admitted at the UNPO Presidency Meeting, which convened from 1 - 3 February 2007.  One of the most important reasons why the Kaptein's Council chose to become a member of UNPO is the fact that it is a nonviolent organization, which seeks to resolve its problems in a peaceful manner. Violence, discrimination, retaliation, frustration and aggression breed viruses of the same kind that eventually affects aggressor and victim alike. 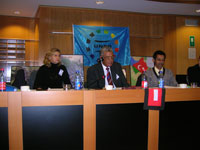