Kaptein John Mc Nab holds his speech addressing the UNPO General Assembly convening in the European Parliament on 16 May 2008.

My name is John Mc Nab and I am representing the Rehoboth Baster community.    One of the most important reasons why we became a member of UNPO is the fact that it is a nonviolent organization, which seeks to resolve its problems in a peaceful manner.    Violence, discrimination, retaliation, frustration and aggression breed viruses of the same kind that eventually affects aggressor and victim alike. The end result is always horrendous crimes against humanity.

The international world therefore has created many mechanisms and instruments to protect us against those evils. The United Nations and its organs have come up with many governances, declarations and resolutions, which are binding to member states, in order to protect human rights, minority rights, culture rights etc. but it seems that the fuel is lacking to activate such laws, mechanisms and instruments.

Indigenous people, minority groups, cultural groups are in most cases poor, lack expertise, knowledge and funds to bring national states on trial before an unbiased international court for the violations committed against them.

Our own nation state, Namibia boasted one of the best constitutions sacrosanct by the United Nations but where were there ever the case and opportunity where Namibia and its constitution were on trial before an international court of justice to justify such revocation.

Going to an international court is an expensive exercise that minorities can not afford, but it still the most effective and peaceful way to solve a serious problem. The international world therefore has a sacred obligation to see to it that such cases must be brought before the highest court of justice where interested observers and parties could be sure that justice has been served to all concerned and so build a foundation on which peace could prosper.

On the other hand, member states of the United Nations are obliged to respect their own constitutions, by honoring constitutionally protective infringement rights, vested rights and minority rights by international law.

In justice call for strong judicial actions; if I may use the words of the late professor Albert Blaustein: ”observers should be evaluating the Namibian commitment to human rights, to international law, to justice itself.”

This cry for help and the demand to put the elite of the Namibian government on trial for their implementation of the constitution in the way they do, come from the heart of the Rehoboth people who lost all their movable, immovable and other assets, as well as their existing rights due to chicanery of law and a willful ignoring of international laws for minority groups and human rights.

The Rehoboth Basters is a minority and a cultural group in Namibia and is now in danger of becoming completely and totally extinct. This cry for distress is directed especially to the UNPO, the United Nations, the European Parliament, the five Western powers, kingdom of Great Britain, Federal Republic of Germany, France, the USA and Canada, who collectively drafted the principles for the independence of Namibia and the international community at large. 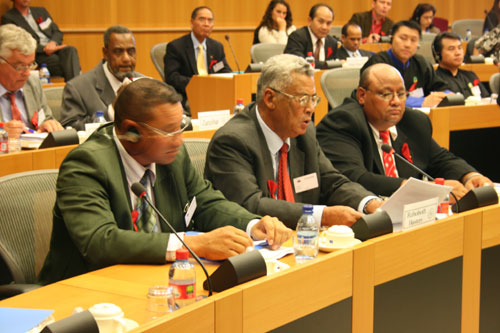