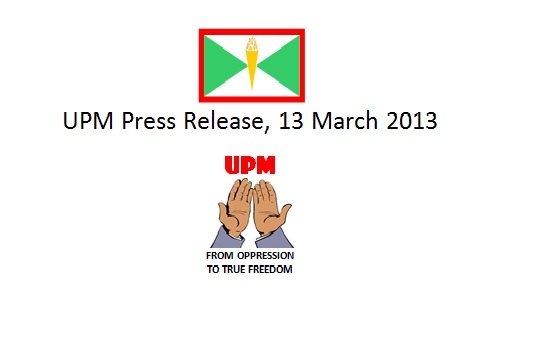 UPM Councillors, Jan van Wyk and Martin Dentlinger in the New Era of 06th March 2013, said that the Rehoboth Town Council is riddled with fraud, corruption, nepotism, abuse of power and conflict of interest. The CEO of the Rehoboth Town Council said the allegations are false and challenged the two councillors to name the individuals they are accusing of wrong doing. He also challenged the two to provide the name of the female candidate in question, who was apparently overlooked for a job.

It is against this background that the two councillors once again want to bring the following points to the attention of the CEO. We however, know what his answer will be.

Cllr Martin Dentlinger on 20th January 2011, a few weeks after they were sworn in, tabled a motion in efforts to get rid of corrupt officials at the RTC and to bring to book those who have filled their pockets with taxpayer`s money.

Dentlinger in his motion proposed that:

1.)         The competency of the CEO be evaluated by a reputable, independent institution in order to internally evaluate his performance over the past three years of office, these reports be submitted to the full council in order to take corrective action on this position.

2.)       The relevant stakeholders and ADONAI’S Information Technology Solutions (Pty)             Ltd be summoned in order to advise the full council on the formulation on what corrective actions are to be taken, in order to start building financial stability in the council.

3.)         At the same meeting the reports from which the sixteen points mentioned before, were extracted from, be circulated beforehand to all members of the council in order to take the necessary steps to correct the situation.

4.)         The staff members incriminated in any of these reports, is suspended with immediate effect and they, as well as all other staff members of the RTC be cautioned not to interfere with the investigation at all.

The said motion was however swept from the table by a Swapo Party majority. The following shows and is part of information to prove their point.

It is alleged that The build together project to date has delivered 424 out of 436 houses, we received statistics (Exhibit JJS034) that there is a shortage of 12 houses, representing an amount of N$848,000.00 to be accounted for, since the bank accounts kept for this project, does not show this amount of money as being reserved, thus, in the absence of related valid explanations and evidence, this constitutes a violation of the Local Authorities Act 84(2), alternatively; corruption, fraud and theft.

The Opposition has for the past months tried to get a full report on the build together programme as the official Mr.Jod when instructed to submit the report, has refused to do so and has decided to leave the Council meeting despite requests by the mayor for him not to leave the meeting. The action of the official is seen by the opposition as a sign of disrespect towards the mayor. The CEO has however failed to discipline the official and the CEO instead at a council meeting thereafter, apologised to the mayor on behalf of the official. The UPM view the failure of the CEO to act against the official as a sign of his incompetence and lack to take advice from the council.

With regard to the female candidate not selected the following should be mentioned: the name of the person is known, but not to avoid embarrassment to her and her family, Mr. Jankowski is advised to note her name from the submission to Management. It is suspected that the fact that her husband was the spokesperson of a community group that has handed a petition to the RTC a few months before her interview for the position jeopardised her position. The fact remains that she was the best qualified applicant on merit for the position. In contrast with Mr. Swartz she completed her studies (National Diploma in Personnel Management, B-Tech HR Management, with about 12 years appropriate experience). As 99,9% of senior management at RTC are male, the opinion of the opposition Councillors were that the affirmative action policy regarding gender equality should be applied and the position be filled by a woman. Mr Jankowski should be able to get the name of the candidate from his HR Office unless such office has destroyed the records. Mr. Willy Swartz was however selected although he was only in a position of Grade 12 with no proof of experience in the HR field. Furthermore, the allegation against his good standing should have been cleared by obtaining a police clearance and proper reference checks, if he was the best qualified candidate for the position. Why was he awarded a bursary of N$ 22 000.00 soon after his ``appointment`` to improve his qualification? The minutes of discussions surrounding his appointment was never reported nor submitted to any council meeting. According to inside information from the Swapo Camp Mr. Swartz was a political appointment, to assist the struggling CEO. Before Mr. Swartz’ appointment at RTC he was awarded a contract to re-gravel some streets in Rehoboth. On which criteria his tender was evaluated against other tenders remains a mystery because he was provided with the Council’s equipment needed to complete the job. No proof exists that he has paid the council for the use of its equipment. Apparently he was also under investigation by ACC but mysteriously this organization turns a blind eye to corruption in Rehoboth. Could it be that they are instructed from above to destroy the Rehoboth pride?

Two more examples why the RTC CEO’s competence is questionable is, his failure to carry out Council resolution like the Reho Spa resolution that legal action be taken against the people who are responsible for the current state of the spa. Until date nothing has happened (over N$800 000.00 in debt). The current Council’s term is almost history, but we never received a financial report to assess the Town’s financial position.

The UPM Councillors read in the newspapers more than what he report to council, such as the alleged embezzlement of up to about 88 million Namibian Dollars of Council money. To date the CEO have not submitted to Council any audit report over the past two and a halve years of the current term. We rather will not mention execution of council resolutions, vehicle misuse, misuse of S and T expenses, overtime, budget control etc, etc.

The newspaper report on the 2010/2011 and 2011/2012 AG reports confirmed our accusations regarding malfunctioning of Rehoboth Administration who was the pride of the town before independence. It is unfortunate that Rehoboth has now become a rubbish dump as the Open File program projected a while ago. To be an expert on denial and excuses will not save this town Mr CEO. Your comrades had justified extension of your term for another year by reasoning that you need one more year to proof your ability. Sorry to say another year wasted as you could prove nothing positive instead.