UPM points out problems at Okahandja 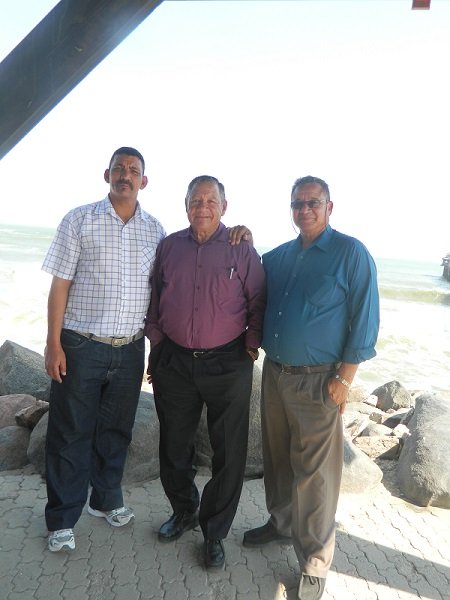 The President of the UPM, Willem Bismarck, and the UPM national chairman, Jan van Wyk, met with branch members on Monday (12 August 2013) to discuss internal party issues as well as problems facing the Okahandja municipality.

On the picture from left to right: Jan van Wyk, Willem Bismarck and Barney Buys.

The following article appeared in the Namibian Sun:

Leaders of the United People's Movement (UPM) have expressed concern over several issues at Okahandja after a visit to the town this week.

The President of the UPM, Willem Bismarck, and the UPM national chairman, Jan van Wyk, met with branch members on Monday to discuss internal party issues as well as problems facing the Okahandja municipality.

The UPM has only one seat on the Okahandja Municipal Council.

According to a press release issued by UPM, the leadership expressed concern about the fact that no community meetings were conducted by the party at Okahandja.

It also expressed concern over the slow pace at which plots are made available to needy people at the town.

Andries Bezuidenhoudt, a UPM councillor at the Okahandja municipality, said the delay in plot allocation is attributed to the fact that council decisions are not executed on time. The UPM leadership called for urgent attention to the problem, and to the provision of basic services.

According to Bezuidenhoudt the council is working on solving the problem.

Although the UPM is satisfied with developments at the town, there is concern about its tidiness, stated the press release.The UPM said Okahandja and Rehoboth are among the dirtiest towns in the country and called for urgent action to be taken in this regard.

The Okahandja branch was also required to pay attention to the identification of competent party members in the Otjozondjupa Region to be nominated later this year to ensure that UPM is ready for the upcoming national, regional and local elections.