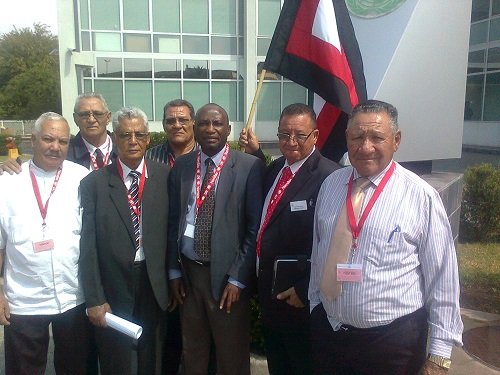 Professor James Anaya visited Namibia in September 2012 where he met with many representatives from indigenous communities, among which a delegation of the Rehoboth Basters. A report of his findings was submitted to the United Nations today.

The 21 page preliminary report by the Special Rapporteur was published on 25 April 2013 and provides an overview of the challenges the Peoples in Namibia face regarding their access and ownership to land, education, self-government and participation.

The preliminary report can be downloaded from the website of the UNHCR as well as via this link.

The final report was presented to the UN Human Rights Council on 18 September 2013. The final report (dated 25 June 2013) can also be downloaded from the UN website or via this link.

Below are some abstracts from the report that deal specifically with the Rehoboth Baster community.

“25. The Rehoboth Baster people have a unique history with respect to their communal land. Both German and South African administrations recognized certain rights of the Basters to their lands, and a homeland was created for them. However, at the time of independence, Baster communal lands were reportedly expropriated by the Government of Namibia. Since the 1990s, community members have sought, yet not been granted, validation of their land claims in both domestic and international forums. It was reported to the Special Rapporteur during his visit that the loss of the recognition of their communal lands has resulted in a loss of the recognition of the Baster traditional authority and has facilitated the resettlement of other groups into their traditional area.” (page 8)

“Recommendation on land and resources:

86. The Government should also address the concerns over lands and natural resources of other groups, including the long-standing land claim of the Baster people and the concern over natural resource exploitation expressed by the Nama people.” (page 20)