A Rehoboth Baster delegation headed by Kaptein John McNab attended a conference on defacto states, which was held on Thursday 15 May 2008 in the European Parliament.

The conference was organized by the Alliance of Liberals and Democrats in Europe (ALDE) in cooperation with UNPO, the NRP and the Taiwan Foundation for Democracy.

The event brought together specialists and academics from varying discipline relevant to the unique position of defacto states in the current world order. Furthermore, representatives from defacto states shared their experiences and viewpoints with the public and the media. Defacto states that were the topic of discussion were amongst others Somaliland, Abkhazia, Taiwan and Northern Cyprus.

The conference consisted of three panels that each dealt with a specific topic. Panel one analysed the legal position of defacto states in international law. The second panel focused on health, economic development and security as it relates to unrecognized states. The final panel investigated the challenges of good and democratic governance for defacto states.

A question and answer session followed after the speakers of each panel presented their views.

The conference was concluded with the adoption of the UNPO Declaration on De Facto States by the representatives and speakers present.The Rehoboth Baster delegation consisted of Kaptein John McNab, Mr. Bernard Buys and Mr. Johannes Dentlinger.

Address by Guests of Honor

Michael Kau, Taiwan Representative in the EU and Belgium

Mohamoud Daar, Ambassador, Representative of the Republic of Somaliland

Panel I  --  “De facto States in the International System”

Steve Kibble (Progressio): “Somaliland - the road to recognition and democracy”

For more information on the conference see: http://www.unpo.org/content/view/8133/81/ 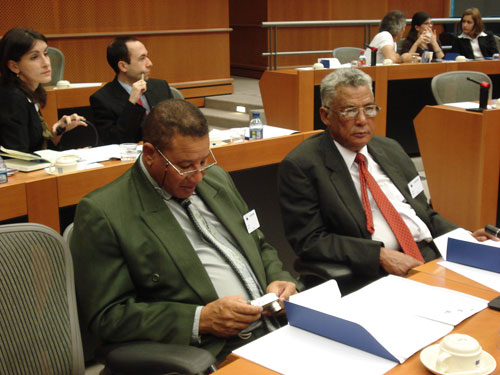