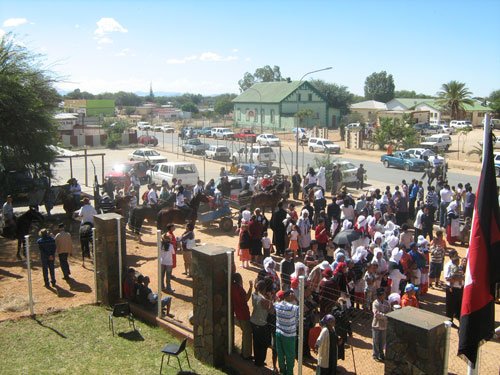 The following article was published by NewEraAll People's Party and the Rehoboth Ratepayers' Association (RRA) formalised their election cooperation with the signing of an agreement at Rehoboth yesterday before a sparse crowd of about 60 people from the party and residents of the town. According to this agreement, the RRA will from today canvas residents of Rehoboth - and Basters finding themselves elsewhere in the country - to vote for APP. In line with the agreement, a minimum of two and a maximum of five members of the RRA would appear on the APP list of National Assembly candidates. There are already two RRA candidates on the APP list, with Lukas de Klerk, chairperson of the RRA, appearing as the sixth APP Parliamentary candidate.

The agreement further stipulates that for the upcoming local authority elections next year, the APP will not put its own candidate in Rehoboth, but instead throw its weight behind any RRA candidate. APP and RRA agreed that they will be in regular consultations and that members of each group can sit at each others' meetings, but will not have any voting rights in their partners' meetings. Should a member of the RRA be withdrawn from the APP list, this position will filled by another RRA member. In the event of the APP gaining sufficient seats in the parliamentary elections, the organisations agreed that an RRA member would table matters concerning Rehoboth in the National Assembly.

This agreement is valid for five years, and any amendments thereto must be agreed to by both parties. The signing of this agreement was hailed as a historic event because it marks, for the first time, a cooperation agreement of its kind for election purposes. The RRA was launched in February 1998 to take part in the local authority election of that year under the leadership of the late Baster Captain Hans Diergaard. "We will not allow that the RRA dies,"Â commented De Klerk, who was also the association's first secretary. He said the aim of the agreement was to get RRA representation in Parliament, describing Hans Diergaard as the "last true Baster leader"Â to have represented the town in Parliament. "The Basters want to get back on the political bandwagon and contribute to political life,"Â said De Klerk. President of the APP, Ignatius Shixwameni, called on all Baster and Coloured voters to throw their weight behind the party in the upcoming elections. A group of Rehoboth community members calling themselves the Unity Movement (or Eenheids Beweging) said the RRA is the official representative of the Rehoboth Basters, and hence does not have the mandate to enter into such an agreement with the APP.

In a statement, the movement said the RRA is launching its own election campaigns, and that the Rehoboth Basters are not obliged to support such.