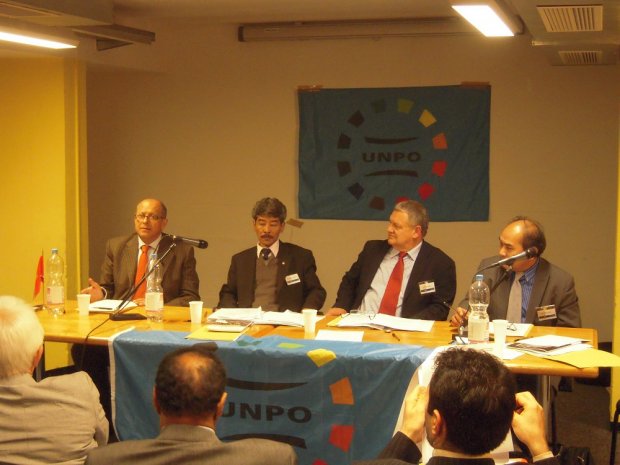 The Unrepresented Nations and Peoples Organisation (UNPO) held its General Assembly on 29-30 November in Geneva, Switzerland. Many topics concerning the plight of unrepresented peoples were discussed. On 30 November 2012, a resolution was adopted calling upon the Government of Namibia to recognize the Rehoboth Basters as a Traditional Authority.

The Captains Council of the Rehoboth Basters has been a member of UNPO since 2007.

Considering that the Rehoboth Baster Gemeente, being the Traditional Authority of the Rehoboth Basters, has, over the years, experienced the plight of Indigenous minorities in Namibia without recognition from the Namibian Government.

Noting that upon Namibian independence, in 1990, the Baster self-Government was abolished and the Basters traditional land and other properties were seized and claimed by the newly-formed government. This disregard for international law and minority rights is still taking place.

Acknowledging that all private Baster farms have further been registered as commercial land as small or average farmers do not have access to crucial financial support after Government expropriation.

Recalling that the Basters were the sole indigenous community to not receive any compensation for their loss, while other communities were either granted reparation or their land back.

Emphasizing that the Basters’ traditional authorities are yet to be recognized by the Namibian government, due to the fact they no longer possess any property.

Cognizant of the current discrimination against Basters’ language and cultural heritage.

Therefore, we, the UNPO General Assembly:

1. Request the Government of the Republic of Namibia to restore the Basters communal land to its people and award them pertinent compensation for their losses.

2. Call upon the Government of the Republic of Namibia to recognize the Rehoboth Basters traditional authority.

3. Reiterate the need for greater recognition of Basters’ traditional heritage.