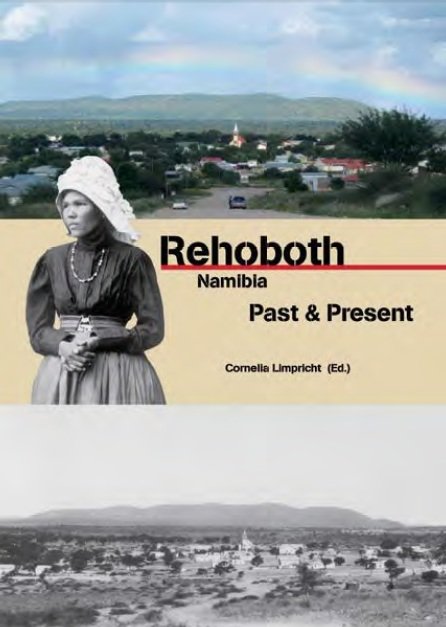 A new publication published by Solitaire Press provides a comprehensive view of the history of the Rehoboth Basters. Edited by Dr. Cornelia Limpricht this volume adds another milestone in understanding the plight of the Rehoboth Basters and can aid in supporting the future survival and prosperity of the Baster people.

The pdf file of the press release is here

The pdf file of the index of the book

- Starting with their early days in De Tuin, Northern Cape, the book compares two other `Baster-groups´ with the then Rehoboth Basters, i.e. the Vilander and Gordonia Basters. All three Baster groups migrated north of the Orange River, as they were not permitted to own land in the Cape. There they searched for a new home and secure pastures for their stock. Only the Rehoboth Basters managed to survive as a group within a defined territory, but it is an open question for how long this will last. With Independence their Gebiet ceased to exist; what remained were farms in the personal possession of individual Basters, making it difficult to maintain the cultural cohesion of the group.

- After a peaceful settling in Rehoboth in 1870 they decided after 20 years – first secretly but in 1895 openly – to switch from communal to private land tenure as a way of securing their territory against the land grab of the new colonial ruler (the German Reich). At that time, promising attempts to open mines as well as the continuing discussions about the borders of their territory were the factors which drove this unique case of privatisation. Nevertheless the Basters faced during German times a massive reduction of the size of their territory, the Gebiet: the article entitled `Debt Farms & Sales of Farms´ deals with the assessing of famous farms like Krumhuk, Gocheganas or Sandputz in a series of single case studies.

- The topic of so-called `mixed´ marriages (during German times) which has been discussed continuously by contemporary historians is not overlooked in this book, but it is now covered through individual case studies, trying to reconstruct the respective family fates´; to name but a few: Denk, Panzlaff, Wede, Peeken, Johr, Jankowski, Mall, Polster and Becker. Here again the land aspect played a vital role as Kaptein and Council of the Basters granted each couple a so-called `gift-farm´ until 1905.

In a separate article the story of Johanna-Susanna Mouton who married in 1897 in Rehoboth the German Gustav Wahl can be traced; six years later the records show that both received Tsumis farm from Kaptein and Council of Rehoboth, which they developed in the next 22 years into a successful country estate. The article describes what happened to a couple of `mixed´ marriage, who moved to Germany. In the mid-1920s the couple, accompanied by eight of their children, decided to return to Gustav Wahl´s home region East Prussia. The Wahls experienced major difficulties in adapting to the upcoming Third Reich, which resulted in their expulsion from East Prussia after the Second World War; losing everything apart from their lives. The Wahl couple remained married for more than 65 years. It is `her story´, the story of Johanna Susanna Mouton-Wahl that mirrored German history. Even after her death her life story became of peculiar importance to one of her grandsons, who had grown up in the German Democratic Republic, i.e. East Germany. 19 years after the German reunification he managed to track down his West-German relatives, which led to a late reunion of the Wahl family.

- As elsewhere in Namibia `the´ churches in Rehoboth play a vital role within the social life. An overview of Rehoboth´ churches, their development, and their historical corner-stones in the context of the situation today is presented in one article.

- This is followed by an extensive article, called Rehoboth´s Interim Phase, on the situation of the Basters under South African domination, which lasted until 1989. Here again the churches are partly in focus, especially the Rhenish Mission Church, whose attitude led on three occasions, in 1915, 1927 and in 1959 to an alienation from church in Rehoboth, causing finally several church break-ups in the Baster society. After the Basters´ unsuccessful uprising against the next colonial ruler, South Africa, in 1925, they were disempowered to a great extent. Consequently the years between 1927 and the mid-1970s have to be seen as a phase of persistent negotiations between the South African administration and the Basters: the latter intending to recover as much self-governance as possible, the former dealing with the Basters through a series of carrots and sticks, as South Africa – due to the mandatory status of SWA – could not work towards the disappearance of the Basters. The climax of this chain of negotiations was Act 56, passed in 1976 by the South African Parliament. The paradox regarding Act 56, which provided for a `Baster Homeland´, was that it was viewed internationally as a major milestone in the development of Apartheid, while most of the Basters perceived it as the opportunity for comprehensive self-determination that was long overdue.

- The impact of Act 56/1976 and its negative consequences for the Basters after the Independence of Namibia is discussed in a separate article. Amongst others three main topics are enlarged, i.e. the land question, the town administration and the question of traditional leadership. Culturally, nationally and politically side-lined with Independence, `the´ Basters were and still are – similar to the situation of the mid-1920s and mid-1970s – entangled in a discussion with the state over the nature of their position in the republic of Namibia. The state expects the Basters to accommodate themselves within the present political system, while `the´ Basters, or (better) some Basters, hesitate to do so. The article does not provide a final answer, but it does hint that a new consensus could be found by the main parties involved, the Namibian state and the Baster community.

- In May 1996 the Supreme Court of Namibia confirmed the High Court´s decision and dismissed the Basters’ final appeal. This was witnessed by an independent law expert from New York, Sid Harring. His article deals about the first and, until now, the last court case on land matters of minority groups in Namibia, providing deeper insights into the way the case was conducted by both sides.

- The first two articles of the `land use´-section of the book discuss three farms situated north-west of Rehoboth: Narais, Duruchaus and Geelkop. Paul Diergaardt andKaptein Hermanus van Wyk were the first owners. It was possible to reconstruct the `biographies´ of these farms, which similar to living organisms experienced changes in their original size and shape over the years. Here the reader will gain some insight about the early distribution of farms, the heritage rules, the farming rights and the long-term effects of part-time farming, farming smallholdings, and farming with difficult farm ownership structures (undivided shares, many co-owners) which feature in the Rehoboth area, – all of these aspects have consequences for the biodiversity of the land:

- The rangeland ecology in the Rehoboth area is the topic of Dirk Wesuls, who until 2010 was part of the multidisciplinary research programme BIOTA (together with his colleges I. Zimmermann and C. Naumann). He reviews the general pattern of the vegetation structure, intending the assessment of veld conditions through the application of different sampling methods. At the same time he provides the description of the methods. His approach is to monitor the vegetation of a farm: even part-time farmers or land managers, who do not possess extensive species knowledge can utilise this methods as a simple tool for monitoring.

- Ibo Zimmermann, an agriculturalist from the Polytechnic of Namibia, looks at the veld management strategies applicable even to smaller farms. Since the productivity of the veld depends largely on the rainfall, which fluctuates tremendously (also) in the Rehoboth area, the veld management becomes ever more important. In a case study he reveals the results of measuring veld condition on Duruchaus, Narais farms and on a former portion of Geelkop farm, as well as on experimental plots on two of these farms, clearly showing the `human´ impact of different management approaches. After discussing various options for veld management he favours the simple grazing strategy of Riaan Dames.

- Last but not least Christiane Naumann presents the results of her Master´s thesis, which researched the ethnobotanical knowledge of Baster farmers. This article deals with human-environment relationships in Rehoboth. It focuses on local farmers and their interaction with rangelands on the level of both action and cognition. She describes the farmers’ land use practises and strategies in an insecure environment that is threatened by environmental degradation. In this context, she elucidates the constraints and challenges that the Rehoboth farmers face and examines how they attempt to improve the quality of their rangelands. Furthermore, this article looks at local perceptions of, and knowledge about, the botanical environment. In particular, she analyses what plant species are of local importance and how the cultural knowledge of plants is distributed among the farmers.

In Rehoboth the book will be distributed by the Rehoboth Community Trust (rehtrust@iway.na – Dinah Strauss), - in Windhoek and Swakopmund it is available in the usual bookshops like BookDen, BookCellar or Swakopmunder Buchhandlung.